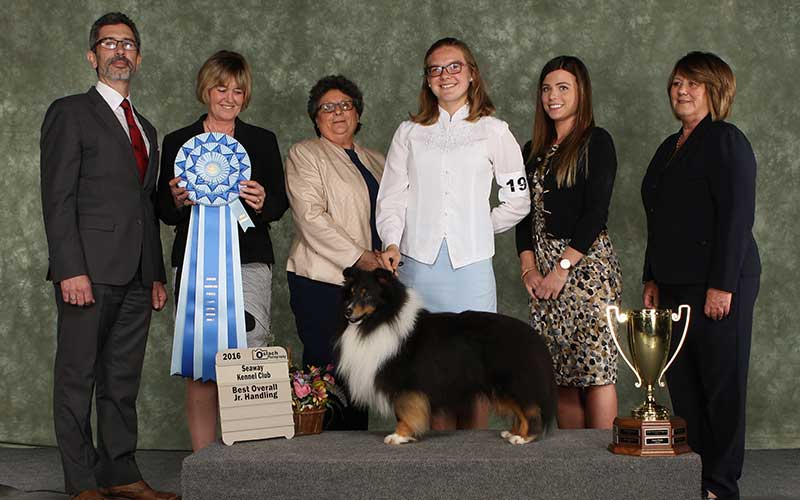 Hello hello everyone! Its been a great year,2016, so far, hasn’t it? Time races past, and January is suddenly June, with summer just around the corner. Speaking of this summer, I have some fantastically awesome news to share with you! On May 8th,

I participated in the annual Junior Handling finals for Zone 7 with a wonderful sheltie named Coal. I was super nervous, as always, but Coal’s wagging tail and calm demeanour settled my nerves. The younger classes were called in until suddenly, it was our turn. We entered the ring alone and from there it was all a blur. Thankfully my mom took a video:)The only thing I remember is that before I did anything, like the down and back, I stopped and took a breath so Coal and I were completely concentrated. It helped so much with focusing on the task at hand. When we were finished we were awarded first in our class, and then we left the ring, and I finally exhaled, happy with our performance. Coal seemed to share my sentiments. There was one more class and then the winners of each class were called. It was a very tough competition, as all the junior handlers were spectacular.

The final round was especially fun, as I got to switch dogs and handle a miniature poodle for a little bit. Finally, it was time for the 4 judges to make their decision. See, in regular juniors, there is only one judge but in this competition there was one judge that directly interacted with the juniors, and three watching us from each corner of the ring and then asking us questions. After their deliberation, they called Coal and me to stack in the middle of the ring, with one other amazing junior handler. They thanked us and then announced the ribbon. “It goes to the sheltie” I remember the judge saying. And I was thinking “oh cool, at least we’ll get reserve”. Then she handed me the blue ribbon, and it was like wait, what? We won! It was such a pleasant surprise! I was humbled and honoured to compete with such great handlers and to be judged by such esteemed judges. I still can’t believe it. So, on July 29,2016,

I will be partaking in the Junior Handling Canadian National Competition!!!!I’m so excited, I can barely wait! It’s a lot of work, and I thank everyone who is helping to organise the trip . Also,thank you to Sharon.Mark and Guy for letting me handle their wonderful Coal. I’m so very grateful for your support and all the time and effort you commit to me. Thank you for the opportunity to represent my zone. And thanks to you, who are reading this blog. Wish me luck please!