On Wednesday July 27,we landed in Calgary and drove to our hotel,which was beautiful.Since it was a long day,we went for a walk and then collapsed in bed.Friday was the real event.I spent the day with the dog i was going to show,a beautiful,bouncy Bearded Collie by the name of Elsa and a new friend,who helped me get prepared and was just so nice to be around.I also got to show her shelties in the championship ring,which was a great way to get ready.An hour before the nationals started,I groomed Elsa,with lots of help.She has a lot of hair compared to a boxer! Half an hour before 7, it was my turn.Some wonderful ladies did my hair into a beautiful french braid and I dressed into my baby blue suit.We went over to the rings and were all ordered to carry in the flags of canada.Then we took an oath and became honorary Calgarians ,and were also white hatted.Finally,the competition started.We all entered the ring for a question portion,then our solo go around.I was very nervous,but it was very fun.After the initial judging,they selected 7 Juniors who switched dogs,and from them the final 4.Unfortunately I didn’t make the cut,but I was very glad to have gone,and i’m very excited for next year.the rest of the weekend was amazing too,as i gained a lot of experience watching the goings of such a huge show and actually handling to new breeds in Junior Specialties,a Chow Chow and an Irish Wolfhound!I also competed in regular juniors,and I ended up winning my senior novice class against 5 other amazing juniors.Unfortunately I couldn’t stay for Best Overall in juniors because I did need to catch my flight back!I couldn’t stay in Calgary,though I really wanted to:)I made so many great memories out there,and I really encourage all of you juniors to compete as much as possible so that maybe one day we can meet somewhere in Canada! 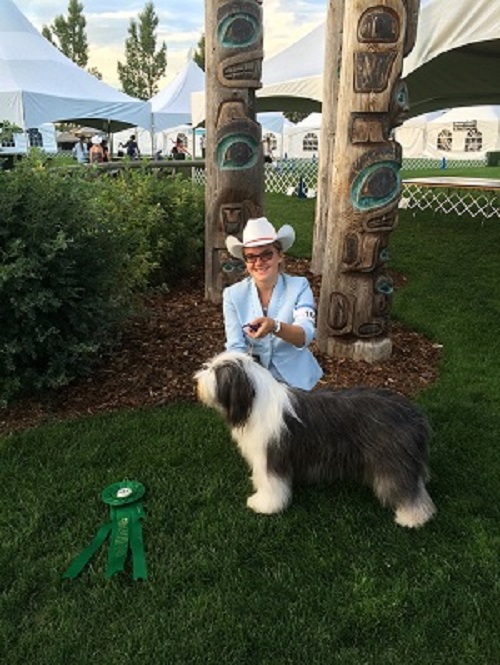